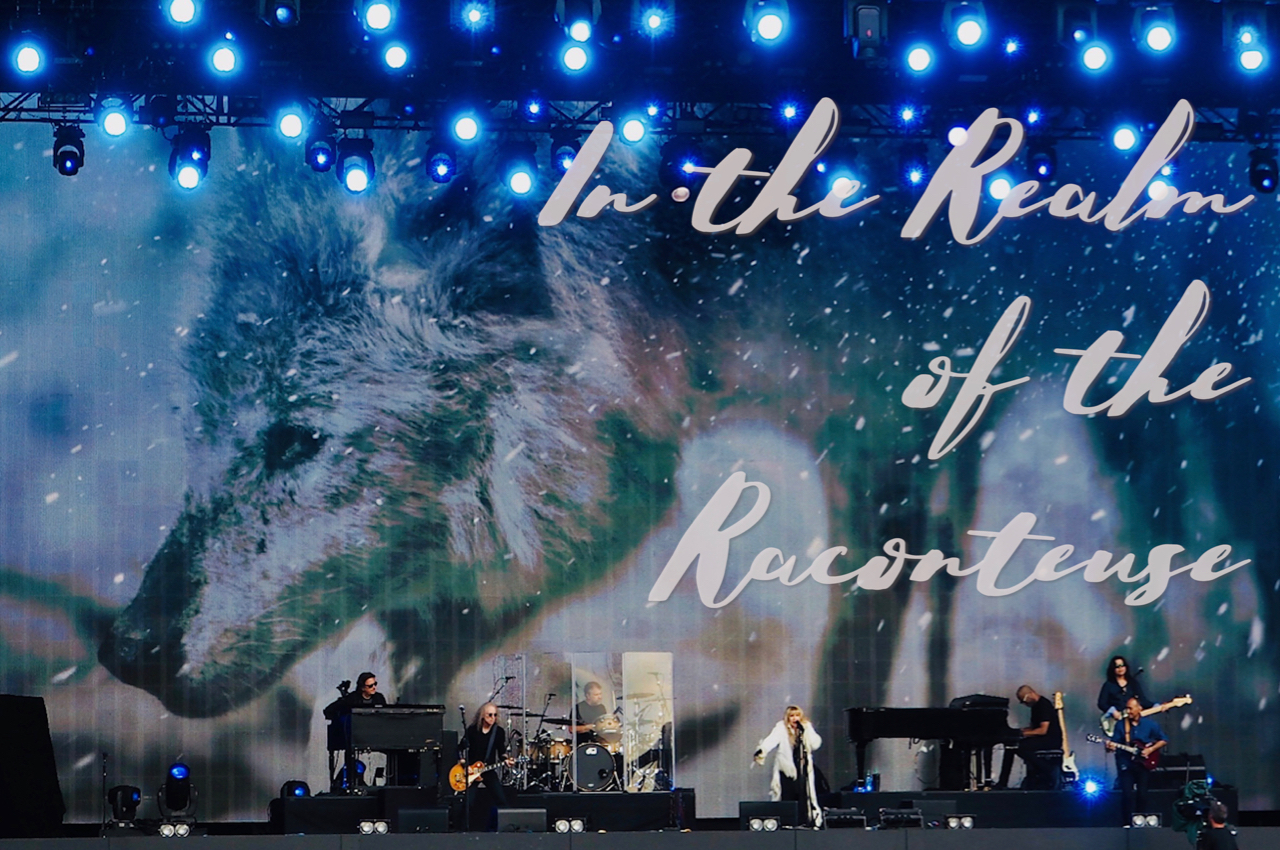 If you believe in the Stevieverse, where Welsh gods and grey wolves speak to the lady of the mountain, you know Stevie Nicks saw 2020 coming. You know she had a premonition back in 2017, when she was on the road for the 67 shows of her 24 Karat Gold Tour:

I must make a concert film.

I must make a film and send it out to my people in the Fall of 2020. When pandemic fatigue is fracturing us all, and leadership has crashed on the rocks of divisiveness and incompetence. When second waves blend into third, fourth, an exhausting fifth, and there is clearly no end in sight. No theatre, no concerts, no festivals. No communal celebrations of sound, light, performance. Just a lot of anxiety and very little joy.

In this film, I must offer the full Stevie: all my classic hits, my unique voice and crack backup band, my hair, my velvet boots, my multiple shawls and one fabulous white, lupine coat. To this mix, I will add my stories—colorful, self-deprecating tales of love, inspiration, ambition—as well as something extra: offerings from my ‘dark Gothic trunk of lost songs’.

Filmed over two nights, Stevie Nicks 24 Karat Gold the Concert is two+ hours of live performance now available via VOD and in select theatres worldwide. With Stevie hosting, it’s part jam session, part campfire circle, part group therapy; the film arriving at a time when we are all missing the jolt and immediacy of live anything. And while my experience of sitting and watching a concert—face-masked, in a theatre where food and drink are banned—was weird and not ideal (i.e. totally awkward to be shouting ‘we love you Stevie!’ in a quiet theatre), I found big-screen Stevie to be not only an entertaining comfort, but an insight into the multi-faceted woman herself.

Reviewers who compile ‘Best of’ lists will say that a great concert film captures the give-and-take between musician and audience, ‘making you feel like you’re part of the moment’. Whether it’s Altamont with The Rolling Stones, Madison Square Garden with LCD Soundsystem or Coachella with Beyoncé, if you couldn’t be there, the film will take you. By that metric, 24 Karat Gold is not a great concert film. The multi-camerawork is fine but unspectacular, and the editing is equally restrained. Given the well-known devotion of Stevie’s fans, reaction shots of the audience are surprisingly rare and do little to convey what it feels like to experience the Stevieverse.

Many other elements that we’ve come to expect in classic concert films are also missing here: no backstage insights, no guest appearances, no overly stylistic choices, no one-night-only, goodbye-folks narrative. On its surface, 24 Karat Gold has the modest, tension-free feel of a public TV, pledge-drive giveaway. Super-fans will relish the experience, but the casual observer might say that you could just as soon listen to the show as watch it.

However, the visuals, or lack thereof, don’t distract from what great listening it is. Stevie and her band are in fine form; her distinctive voice is older, yes, but as expressive as ever, and long-time guitarist Waddy Wachtel is equally agile and ageless. Her best-known hits such as “Rhiannon”, “Stand Back”, “Edge of Seventeen” and “Gypsy” are given the expansive arrangements they deserve and the audience expects. “Gold Dust Woman”, in particular, is rendered dark and powerful like its subject matter. Songs from her ‘Gothic trunk’ also hold up amazingly well. A punchy number called “Starshine”, written decades ago while hanging out with Tom Petty, asserts itself as a fun, driving-with-the-top-down shot of California rock.

But what sets the film apart, and what you won’t find on the album of the same name, are Stevie’s stories. I hope that her biopic, or an exhaustive documentary, is currently in development because this woman has lived. And her source material burns with narrative possibility. Anecdotes about her old Toyota and early years with Lindsay Buckingham, her sister-pact with Christine McVie, her friendship with Prince, what inspired her to write “Landslide” are funny and fascinating, but above all testaments to her unapologetic drive and boundless talent. Complicated yet compassionate, she is the only woman to be inducted into the Rock & Roll Hall of Fame, twice.

That there is so little separation between her songs and herself is a large part of her appeal. With a garland on her head and a tambourine in her hand, Stevie is everything she sings about: the holistic sister, the Welsh witch, the lady from the mountain. Over 50 years and countless classic songs, she has established a unique place for herself in rock-and-roll and rarely wavered from it.

“It’s a trip. It’s a journey,” she tells the audience before proudly announcing that she’s 68 then telling everyone, “I’m a reporter. I’m a chronicler.”

She is also a legendary singer, songwriter, rebel, raconteuse and now, over the course of Stevie Nicks 24 Karat Gold the Concert, a remedy for troubled times. If you’re in need of the full Stevie, she’s right here, to “wish all that goodness for you” and to say:

“Take care of each other. Save the world! You can!”