MEANWHILE, ON THE ENTERPRISE…

CAPTAIN ‘HUBS’ T. KIRK: Spockmom, our current course is taking us to an outpost that calls itself ‘Asia’s world city’. Not much ambition beyond its own planet. What do we know of this quadrant?

SPOCKMOM: Very little. What we do know is bizarre. Despite extremely crowded conditions, hot, humid weather and a lack of good Tex-Mex, the population – a mixture of locals, foreigners and mainland shoppers – co-exists relatively peacefully.

KIRK: Relatively? Anything else I should be aware of?

SPOCKMOM: The inhabitants are not known for their manners or patience.

Captain’s log, Stardate 11409.09 Island substation POK4LAM has issued a priority one distress call. We are set at warp speed six and assuming Klingons. We’re going in armed for battle.

KIRK AND SPOCKMOM LEAVE THE ENTERPRISE TO ASSESS THE SITUATION. THEY ARRIVE AT THE SOURCE OF THE DISTRESS CALL: A LOWRISE BUILDING WITH A PERFECTLY HIDEOUS NEO-VERSACE FACADE.

AFTER SOME TROUBLE WITH THE SECURITY GUARDS ABOUT THEIR LACK OF HONG KONG ID CARDS, THE CREW IS ALLOWED IN.

KIRK: Turtles! They signaled for help because of turtles!

SPOCKMOM: Trachemys scripta elegans also known as the red-eared slider. The most commonly traded turtle in this part of the galaxy.

KIRK: What seems to be the trouble?

SPOCKMOM: A most curious situation. Two North American terrapins – an invasive species that carries the disease salmonella and has a life expectancy of some 30 years – were given to a three-year-old as a birthday gift.

KIRK: A birthday gift? For a toddler? Who would do such a thing?

SPOCKMOM: Apparently this is typical behaviour on planet Hong Kong. Illogical, to say the least.

KIRK: I’m not allowing turtles on my ship. Remember the tribbles?

SPOCKMOM: Yes, indeed. And the creatures before us now aren’t even cuddly.

SPOCKMOM: I did, Captain, Hubs…

KIRK AND SPOCKMOM LOCK EYES FOR A SLOW SECOND, THEN KIRK PULLS HIMSELF AWAY.

KIRK: It’s not that kind of fan fiction, Spockmom.

KIRK: We have orders.

SPOCKMOM RELUCTANTLY RUNS A SMALL SCANNER OVER THE TURTLE TANK.

SPOCKMOM: According to my readings, the terrapins, while healthy, are unlikely to reproduce. They’ve been living in a small tank for some eight years, and the daughter, now eleven, has grown bored with them. It’s clear that…

KIRK: They need a new home.

SPOCKMOM: A larger living space would certainly improve the animals’ physical and mental health as well as the overall well-being of the parents looking after them.

KIRK: This planet looks green and lush. Let’s release them in to the nearest body of fresh water.

SPOCKMOM: Illegal, Captain. And rehoming to larger quarters is not an option either. The local reptile rescue society has informed us of 100 other abandoned animals currently in the queue before these two.

SPOCK: One could say that. In fact, the mother just did.

KIRK: I did notice a certain frustration emanating from her, not to mention the small bald patches near her temple.

SCOTTY (on board the Enterprise): Aye, sir.

KIRK: I want the latest status report on the reptilian rehoming wait list. What are our chances?

KIRK: We’ve done what we can, Spockmom. Let’s blow this popsicle stand.

SPOCKMOM: The mother seems to be blocking the exit. I detect a weapon, a device invented by the Native American tribes of…

SPOCKMOM HAS TO DUCK AS DISTRAUGHT TURTLE MUM COMES OUT SWINGING.

KIRK: What’s she saying? I can’t decipher her screaming.

SPOCKMOM: She says she cannot let us leave without the turtles. She must know that transporting animals from one planet to another is a Federation offense.

KIRK: She’s not listening to reason! That’s it: set phasers to stun. Ma’am, we don’t want to hurt you.

SPOCKMOM: If she touches you with the terrapins you must wash your hands immediately.

KIRK: By the far reaches of the galaxy, I’ll never let that happen!

KIRK: Ma’am, I know a shifty smuggler, deals in tribbles. You won’t want to know what he does with them, but I’m sure he’ll take your turtles. Spockmom, head for the door! She’s closing in!

KIRK SHOUTS IN TO HIS COMMUNICATION DEVICE.

KIRK: Scotty, beam us up! Beam us up!

THE WOMAN LUNGES FOR KIRK, JUST AS HE AND SPOCKMOM DEMATERIALIZE.

BACK ON THE ENTERPRISE, KIRK APPEARS ON DECK WITH A TORN SHIRT AND FRAYED HAIR. SPOCKMOM FIGHTS THE URGE TO GIVE HIM A HUG.

KIRK: I’m fine. But Spockmom, do I detect concern?

SPOCKMOM: Captain, it is a logical reaction after battling a half-mad mother who finds she is unable to offload two growing terrapins.

KIRK: Turtles she never even asked for. I’m afraid we were of no help to her whatsoever. Tell me, Spockmom, how could this happen?

SPOCKMOM: I am not privy to the inexplicable nuances of human gift giving. I see no practical use for reptiles kept as pets.

KIRK: They’re not even cute.

KIRK: I suggest we continue this conversation in quarters. 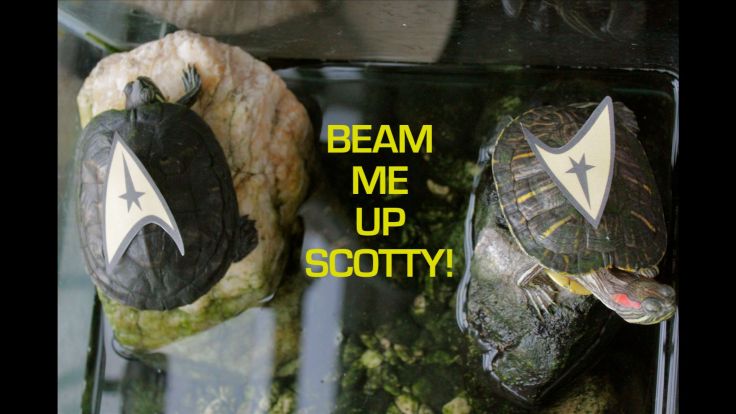 4 thoughts on “The Trouble With Turtles”