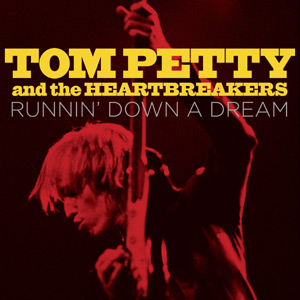 So I set two small goals for myself this summer: to read Middlemarch and to watch the FOUR-hour, Peter Bogdanovich-directed Tom Petty documentary: Running Down A Dream. It’s slow going on both fronts, but I am loving each one. Friends had warned me that George Eliot’s writing wasn’t quite as ‘readable’ as say Jane Austen, but the novel doesn’t feel like a chore by any means. It’s got all the hallmarks of a classic English novel: a will is read, feelings are restrained, money’s a problem, love is unrequited and a young man finds out there is a fortune waiting for him. Great stuff.

I’ve just gotten past the mid ’80s and have reached the Dylan years with the TP and the HBs doc. Fantastic archival footage, performances and loads of interviews, as you would imagine in such an exhaustive documentary. I really enjoyed hearing about their work with Stevie Nicks and how influential their music videos were in the early years of MTV. I mean, seriously, when you look at Tom Petty’s body of work, the sheer number of incredible songs he’s written, he is right up there with the greats.

Funny how when we think of ’80s music, we tend to think of every genre – New Wave, Heavy (Hair) Metal, Rap, Punk and Pop –  except Rock. (Not including Bruce Springsteen of course, who was kind of a genre unto himself in the ’80s.) But plenty of rock musicians who’d gotten started in the ’70s were still releasing albums, touring and making interesting music videos that sustained rock radio through the decade. You could call this music kind of boring, MOR stuff but a lot of it is pretty darn good – a blend of blues, rock, jazz, New Wave. And I think these ‘oldies’ acts mix in well with college-radio rock bands such as REM and The Pretenders that went on to huge careers themselves.

So here’s a playlist of ’80s rock to start your weekend. Let me know what you think!