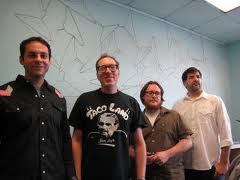 Father’s Day is this Sunday, so in honor of rock Dads everywhere I thought I’d talk to some actual musician Dads and get their take on music and parenting. I sent them some questions and was amused, surprised and most of all honored by their heartfelt answers. My guests are from all over the world, but briefly I’d like to welcome:

Tyler lives in Austin, but hails from Moscow, Idaho. He plays bass and sings for a band called San Saba County. I’d call them a very Texas band; they use the term: post-alt-country. You can check them out on their MySpace page. Tyler’s daughter, Evie, is almost two, and she’s the cutest thing you’ve ever seen. Tyler’s married to my good pal, Christie, whom I’ve mentioned before as one of my main music-loving resources.

Kevin lives in Hong Kong, but is originally from the U.S. His son, Jonah, will be three years old in July. By day, Kevin works as Asia Business Editor for CNN.com International and at night he plays bass in a couple of local bands, including Transnoodle. He describes their music as “original ska, punk, funk, Russian folk music “. For proof, you can check them out on YouTube:

And last but not least is Bill, my brother, who lives in Paris and has twin boys – Felix and Louis – aged eight. Bill works a very white-collar job as a management consultant but also plays guitar in a cover band called The Outliers. He’s as fanatical about music as I am. And he’ll be pleased to know that after many years, I finally have a keen appreciation for Paul Simon.

There were so many interesting and honest answers to my questions that I’m going to post this in two installments. So read on for Part I of my Q&A with some way cool RockDads:

Do you have any specific memories of what music your parents listened to?

Tyler: There are three bands that stand out from my childhood and they all were mostly played on a cassette boombox on the beach during our summer camping trips: ZZ Top, Huey Lewis and The News and John “Cougar” Mellencamp. My parents were always music listeners but not music lovers and I would never say they had a taste of their own. It was always whatever was American Top 40. They divorced when I was around seven, and I remember soon after the divorce my dad buying me John Cougar’s “Scarecrow” album. He looked me in the eye, handed me the cassette and said, “Listen to this, son,” as if it held the answers of the world. I’ll admit that I have tapped my foot to one or two of the ‘Coug’s’ songs.

Kevin: My parents were teenagers on the wrong side of the 50s — Dad listened to classical and Perry Como, Mom liked easy listening, so the radio was often tuned to muzak. That changed for me when John Lennon died when I was 12 and suddenly all the stations were playing The Beatles: I had heard every song before in lame elevator form, but never actually heard them do it. I listened to the Beatles non-stop for a full year. My dad and I connected more on music in high school when I studied music and he was surprised to hear Aaron Copland’s “Appalachian Spring” on my stereo.

Bill: I have many, many memories of Dad’s music: Herb Alpert’s “Whipped Cream and Other Delights” and the other Tijuana Brass LP with the airplane are primal memories because of the A&M Records logo. Dad was keen on the 50’s-60’s white jazz guys like Dave Brubeck, Cal Tjader, Stan Getz and the funky instrumental space age bachelor pad records he had. Later, when I began playing saxophone and got serious about jazz, he would bring home bargain records of these guys that he remembered from his college days. He got me Dave Brubeck’s Greatest Hits (with Dave in the world’s greatest horn-rimmed glasses), which has been a very important record to me. He got me an obscure Bud Shank record that I played to death. All sorts of curious things. He also got me my first Charlie Parker record (a Verve collection), which opened up a world that has been absolutely fundamental to who I am.

What’s funny is that I don’t recall him listening to many of these albums in his free time. I don’t know that he really connected to this music in the way you and I have connected to our music. My memory is of TV at home and talk radio in the car.

Who are the top three artists you want your children to know/listen to?

Kevin: Bob Dylan, Jimi Hendrix and John Coltrane — great composers (though John and Jimi were also virtuosos). Listening to them at 18 is different than listening to them at 42, but somehow the music grows with you. It’s music we could listen to together.

Bill: I am very, very proud that Louis and Felix have a) responded so well to music I love and b) have surprised me by exercising their own judgment on what makes their bedroom playlist. They are huge Beatles fans and love “Help!”, “Rubber Soul” and “Revolver”. They could stop there and I would feel my work is done. But Lo! and Behold! they have jumped on my copy of Earth, Wind and Fire’s “Greatest Hits Vol. 1”, my Buddy Holly collection, Lemonheads “It’s a Shame about Ray”, REM “Green” and all sorts of things. They are only eight years old but they already have their own tastes and their own agendas in terms of why they listen to music. Louis is very rhythm-oriented, likes to dance and wants a physical rush from his music. He instantly connected to the opening riff in The White Stripes’ “Seven Nation Army”. Felix also likes a good hook, but is more sentimental and lyric driven. He is the frustrated romantic who needs another to sing his heart. He’ll be living with The Beatles all his life and will no doubt be passionate for bands that “stand for something” — a U2 or REM ten years from now.

So, to answer your question, here is the list:
1) The Beatles — check
2) American R&B and Blues — they’re deep into Motown already and I am optimistic that this will lead to blues and the rest of that wonderful world of black music that I believe is their best anchor to American culture.
3) Miles Davis, specifically “Kind of Blue”.

Tyler: In a perfect world, my little girl will like every band that I push onto her. I do know that this will never be the case. I would hope that she could at least respect bands like Wilco, My Morning Jacket and Neko Case for their classic guitar and vocal-driven song craft.

Performing in bands can offer all kinds of temptations that go hand-in-hand with a late-night lifestyle. Would you encourage your child to pursue rock-n-roll? Why or why not?

Kevin: I’ve gone down that road and did a U-turn. I quit drinking a week before I learned I was going to be a father. For me, the partying part of music just became boring, depressing and dangerous. Still spend time in bars, but it’s Coke (Coca-Cola, that is) for me now. If my son picks up the guitar I’m sure I’ll worry, then remind myself what I was doing when I was his age. Then worry even more.

But I met my wife by playing music — she asked me out after seeing me at a gig. So in a way, Jonah owes his existence to my nightlife pursuits. I suppose I’ll need to give him room to make his own mistakes. I mean, really — do I have a choice? But if he falls into that trap, at least I’m better equipped now to help him get back.

Tyler: If you’re referring to drinking, smoking and the like, I cannot condone it but I know what kids will do. I’m still a kid myself. But playing music is much more than getting loaded and banging on an instrument. It’s the one constant in my life that I will always love and never quit so if my kid can have a focus like that in her life I will never stand in her way.

Bill: I would encourage them to pursue rock-n-roll. Drugs scare me, but they will pass that gauntlet no matter what. What’s important is that they have something meaningful and enriching to their self-esteem. Plus, it may help them get girls to a degree that I could only dream of as an adolescent.

Stay tuned for Part II where we hear the Rock Dads talk about their favorite lullaby’s, how listening to music will be different for their kids, and what they would do if their son brought home the 18-year old incarnation of Chrissie Hynde.